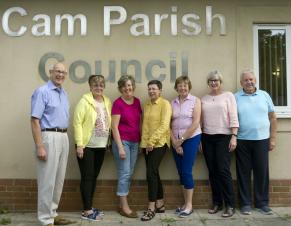 Cam's Neighbourhood Development Plan Steering Group started meeting in 2014 under the Chairmanship of Cllr Terry Grocutt with Cllr Mike Grimshaw as vice Chair. As time went on they were joined by other councillors and members of the public.

The group worked with consultants, Place Studio, and went through several stages before producing their first draft of the Neighbourhood Plan in 2019. Before they reached that stage members researched Cam's distinctive character in detail to gain an overall vision of its future development.

This involved a lot of footwork and eight character areas were identified and these are shown in an extensive Design Statement produced by the group in 2018.

Extensive research surveys were done and members identified potential areas for development as well as desired Local Green Spaces in consultation with residents. Many, many days, weeks and months were devoted to producing the best Neighbourhood Plan possible.

After public consultation and when the Regulation Draft 15 was complete it went to Stroud District Council for Examination. The group and the Council were delighted to gain such a positive response from the Examiner.

His and SDC's comments have been taken on board and a Final Referendum Version is now ready. Unfortunately the Referendum has been postponed till 2021 because for the Covid pandemic. But we believe Cam residents will be as proud of this Neighbourhood Plan, having contributed over the years with their interest, feedback and comments, as we are.