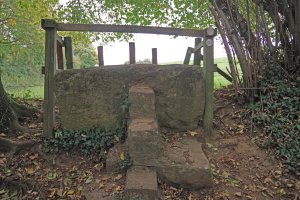 A NEW survey has been completed of the nineteen historic stone stiles that can be found in Cam. The review is an update of an earlier study carried out in 2007 and includes an extra stone stile found at Jubilee Playing Field.

John Fowles carried out the survey between November 2020 and April 2021 to update the earlier report carried out by Cam Wildlife Group 15-years ago. Both reports can be found on the links at the end of this article.

In his report John says the same stone appears to have been used for all the stiles and is probably limestone from the former quarry at Woodfield.

He adds: "The purpose of the stiles is unknown and an investigation of the Berkeley Estate records produced no information on them. One theory is that the area was widely used for sheep to provide wool for the local industry so it's possible that the stone stiles were used to prevent sheep getting through stiles on public footpaths."

During the survey, an extra stone stile was discovered in an overgrown hedge in the corner of Jubilee Playing Field. The stone is broken in two but both halves are vertical and appear to be in the correct position.

John believes it is possible this path originally went to Coaley Junction but was diverted when part of the field became a local refuse tip.

A Stone Stiles Walk leaflet produced by Cam Wildlife Group and Stroud Valley's Project in 2007 can be found here http://btckstorage.blob.core.windows.net/site9587/Cam%20Stone%20Stiles.pdf

A campaign to record every remaining stone stile in Gloucestershire has been launched by Peter Wilson in association with CPRE, the countryside charity, English Heritage and Cotswold Naturalists Field Club.

Since the project was launched last year more than 500 stiles have been recorded by 175 people in Gloucestershire.

The group ask that if anyone is out walking and spots a stone stile or knows of an existing stile, it is photographed from both sides and a Stile Recording Form downloaded from the CPRE website, click here. The form needs to be emailed to peter.wilson@woodchestervalleyvillage.co.uk

Cam Parish Council has been working with the Cotswold Wardens to replace crumbling wooden stiles with kissing gates to create circular walks for people for all abilities. Five stiles were replaced in Ashmead Green in 2020 and new routes are now being considered.

The photograph shows a stone stile which can be found on the east side of Field Lane in Cam.

Please note - all social gatherings, regular bookings and meetings at the Parish Council office have been cancelled until further notice in line with the latest Government advice following the Coronavirus outbreak.

Staff and Councillors are still working and are available on email or mobile number 07842 104438.