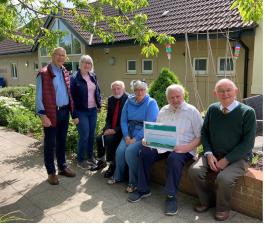 The Cam community has supported an important planning document which will give more control in the shaping of future developments in the parish.

The Neighbourhood Development Plan was supported by more than 85% of the voters in the recent council elections and has now been adopted.

The plan took five years to produce and is a collaboration between residents, Cam Parish Council and the Neighbourhood Plan Steering Group. It will give clarity on working with developers in the future to retain Cam's special character, such as steering the way houses will look and the type of materials used.

Councillor Mike Grimshaw, who is chairman of the Neighbourhood Plan Steering Group, thanked everyone for their hard work in producing the NDP and all those who voted for it.

He said: "This is such an important document and it's heartening that 85.29% of the people who voted supported it. A tremendous amount of work has gone into the NDP but we now have a document in place which will help to shape Cam and which developers will have to work within."

The Neighbourhood Development Plan is available by following the link https://www.camparishcouncil.gov.uk/uploads/cam-ndp-rererendumv8-lowres-1.pdf